Tongeren, was in Roman days the administrative capital of the district (civitas) Tungri. These Tungri were at the time of Emperor August (27 B.C. - 14 A.D.) a governmental federation of a few autochtonian tribes who decennia before offered resistance to the invading Roman army of Julius Caesar. One of these tribes, namely the Eburons, under the command of their King Ambiorix, won a victory against the Roman Legion in 54 B.C. That battle took place near Atuatuca, a yet unknown area in the Eburone country, where Romans had their winter quarters.

More than 2000 years of history have left an exceptionally rich cultural-historical patrimonium. 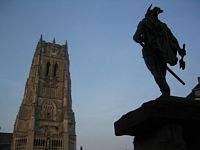